I’ve never met a person alive who doesn’t get suckered to a bakery window when they spy these babies in the display. Belgian buns are the great loves of my life – and this was my first attempt at baking them. Soft fluffy insides, plump raisins…and shitloads of icing. Don’t forget the cherry! 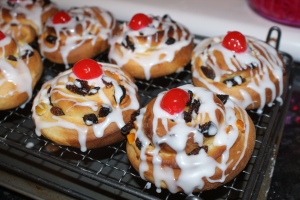 First off, don’t panic. These are seriously EASY. They just take time for rising and proving. The actual baking time is so minimal that you’ll be scoffing these babies in no time. I was seriously surprised at how fast they baked – and watch out, because any longer and they’ll burn. I *just* about rescued mine.

1) In a big bowl, mix together all the dry ingredients – the flour, sugar, yeast and salt. Make a little dip in the centre and add your beaten eggs, milk and melted butter. Stir it all in until it gets clumpy; then abandon the spoon and knead it into a sticky ball.

2) Knead the sticky ball on a lightly floured surface for around 5-10 minutes. It should become smooth and stretchy. Once it reaches that texture, plop it into a lightly oiled bowl (olive oil) and cover in cling film. Leave in a warm place (by a radiator, or a warm oven) for about an hour, where it’ll double in size.

3) Grease two baking trays – you need two to give the buns space to expand. Retrieve your risen dough and knead it again until it’s back to its previous elasticity. Now, at this point the dough should “fight” you, so be determined and stretch the bugger until it complies. Use a your biggest, best rolling pin to roll the dough into a big rectangle – around 45cm x 30cm. stretch it with your hands if you have to. It should become about the size of a large oven tray. Now, scatter your raisins and peel mix all over the rectangle – as much or as little as you like, but make it an even coating. Starting with the longest side, roll your rectangle into a big sausage. Rock back and forth to get a good shape, and pinch the seam together to keep the raisins in. 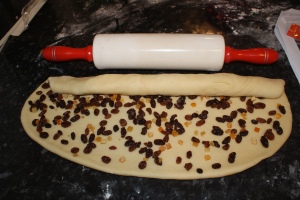 Now chop off equal segments – about 12-14 pieces, and place them flat side down onto your greased baking trays. About six-seven on each one, giving them space between each other to breathe while they bake. But first, get your clingfilm and cover the trays – leave them by the oven or the radiator again for another 30 mins. 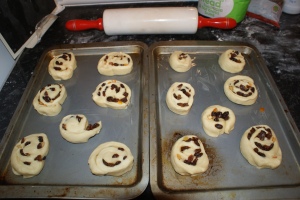 While they’re proving for 30 mins, preheat your oven to 180-190 degrees. WATCH this temperature – mine came out a little too brown in a fan assisted oven, so maybe a lower temperature would be good. When the buns are ready, take off the cling film and stick ’em in the oven for just fifteen minutes. That sounds crazy, but that’s all they need. In fact, I advise that you check these at ten minutes. If they’re light golden and sound hollow when you tap the base (like you do with bread) then they’re done. Let them cool on a wire rack.

4) Once cooled, measure out your icing sugar and gradually add the water until it’s a thick, white paste. Use the water to loosen it until it can be drizzled, but don’t make it too runny; the icing will go transparent and won’t look as nice. Plus, it’ll drip off the buns. You can saucily whip the icing across the tops, or coat the whole bun – whatever you like.

Just be sure to add a nice dollop on top for your halved glace cherry. 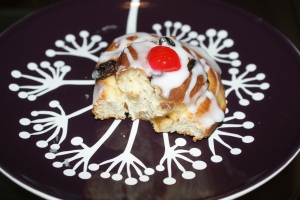 One thought on “Simple Belgian Buns”